Warner has been treating sick trees for over 50 years. If you look to the left there are links to our websites on Citrus Trees - Palo Verde Trees – Pine Trees – Queen Palms and the Warners Tree Surgery Website. There is also a link to our YouTube channel.

The Arizona drought that started sometime around 1984 was responsible for millions of pine tree deaths. Notice the date of the start of the drought 1984.

I was living in Payson Arizona in 2004, 20 years after the start of the drought and the forest was starting to die. The city had imposed rules to preserve water, that prohibited the watering of outside plants, but many of the Payson residents were secretly watering the pines on their property at night to keep them alive.

Take note that the forest contained millions and millions of hungry bark beetles that wanted to eat our personal trees, but the trees that were secretly watered had enough pitch to defend themselves, and they are still alive today in 2017.

To learn more about the relationship between water stress and pine death please see the article that summarizes some of the research done on the subject written by Mari N. Jensen on Sept. 20, 2005.

In which he states:

"The high heat combined with the extreme dryness put the trees under so much water stress that the attacks from bark beetles finished them off. Under such conditions, the trees cannot make enough pine sap to defend themselves against the insects."

Scientists have also discovered a second reason why pine trees die from water stress, and they liken it to a heart attack for trees.

"Trees take in water through their roots, and pump that water throughout the tree to hydrate leaves and support photosynthesis. In times of plenty, water moves easily through the tree. But when temperatures increase, evaporation from leaves drives higher water demand. At the same time, if water is harder to come by due to drought, the tree's roots have to pull harder to draw scant water from the soil. Tension builds in the tree's "pipes" as they work harder and harder to move water, like a person trying to suck a very thick smoothie through a small straw. At a certain point, the tension on the pipes throughout becomes so great that bubbles of air enter the pipes and block the flow of water. It's called an embolism.

"It's a little bit akin to a tree heart attack," Anderegg says. "You can actually hear this on a hot summer day if you stick a microphone up to a tree—you can hear little pings and pops as these pipes get filled with air." Blocked pipes lead to tree death"

So how much water is enough for non native trees like the Pine - Ash - Oak - Maple - Sycamore - Cottonwood - Walnut - Mulberry, and all the other trees that grow wild in the eastern states, and in the costal states of Northern California, Oregon, and Washington ?

To answer that question all you need to know is how much rain normally falls in those areas and then add a little bit because we live in one of the hottest driest places on the plant and then you'll have a real common sense idea of how much water your none native trees really need to stay healthy.

As you can see from the information below both Indiana and Florida have between 50 to 70 inches of rain a year which incidentally is about how much water you need to put on a lawn here to keep it green. And as you look around you can see how healthy Pine Trees and Ash Trees look in lawns.

Luckily for us citrus growers have made a science out of how much to water citrus trees, and the collage of agriculture has published a guide that breaks it all down - by size of tree, and month of year, and gives you an answer in gallons per day. And incidentally if you do the math - which I did - the total water that would be required for a 12 foot diameter citrus tree - per year - just about equals the amount of rain that would fall on a 12 foot diameter citrus tree - in Florida - in a year.

So unless you have a broken pipe or you're just going crazy with the water - please ignore any "Tree Expert" that tries to tell you the problem with your none native trees are that your giving them too much water. 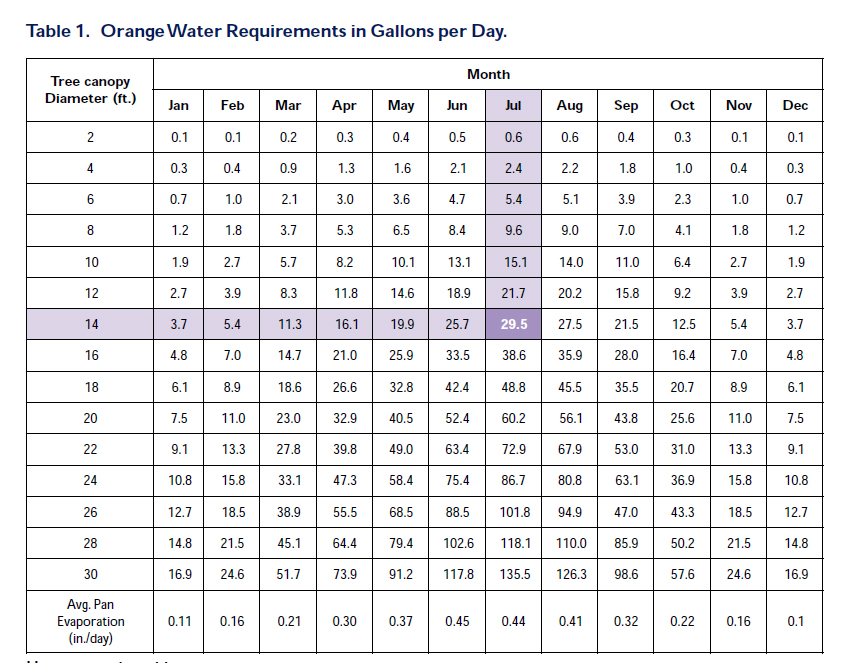 For more information on setting up a watering system refer to this manual which is put out by the city's of Maricopa County.

I've been a Tree Surgeon (that’s the old name for Arborist) for over 50 years, furthermore Warner’s Tree Surgery has been serving Mesa, Gilbert, Tempe, Chandler, Scottsdale and parts of Phoenix for over 25 years.